Q&A: Should Coaching Be a Choice? 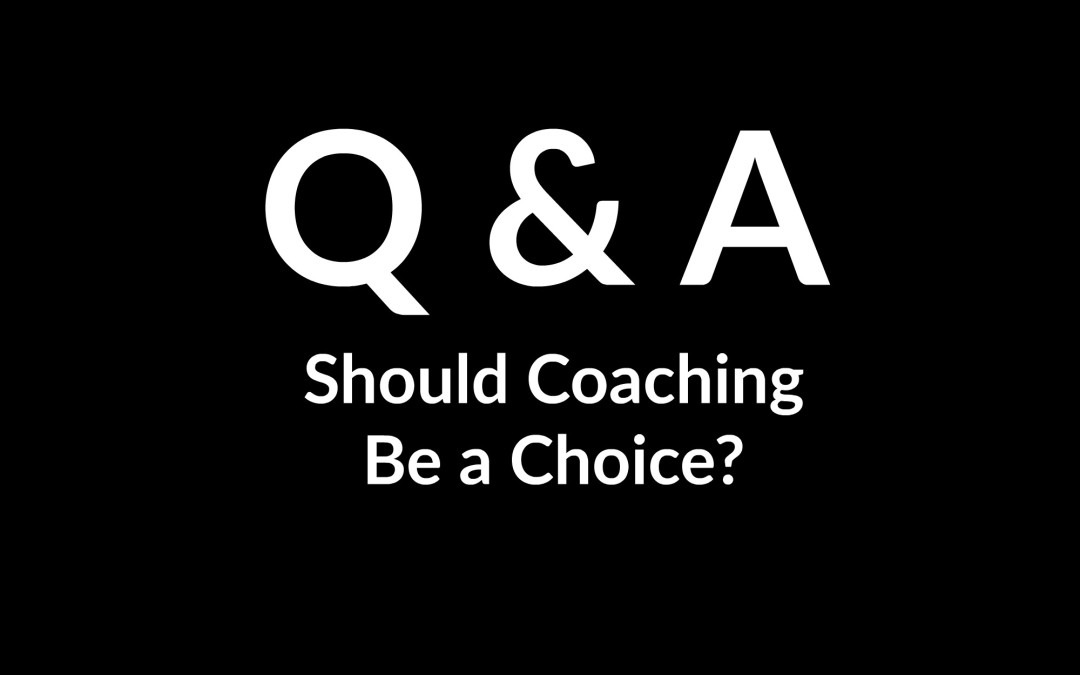 I am lucky enough to get a bunch of questions each week.  I say lucky, because I feel like I learn a ton more when I am asked to answer questions.  Plus, it gives me insight as to the most common trouble spots that folks are having in the field.  It often gives me information on what I need to write about in depth.

One of the top 10 questions I’m asked is whether coaching should be mandatory.  I have really strong feelings about this topic because I have seen the good, the bad and the downright ugly with coaching and I think that there is great room to improve and not make it so darn painful for the teachers or the coaches!

Here’s a snippet of a recent coaching question, followed by my answer.

“We implemented instructional coaching at our school five years ago.  There was considerable push back from the staff initially.  The expectation was (is) that all staffers are coached.  I became the coach at the beginning of year three of coaching and there were still members of the staff that would not willingly participate in the coaching process.

I’m now in year three as a coach, and although there have been improvements and I have had to do a lot (LOT) of  work to gain the confidence of the staff despite the continued ill will of a a few staffers, I am not convinced that our current model of coaching should be maintained.  (I’m exhausted.)   I plan to return to the classroom next year, and I am working with admin to consider other models of coaching including peer coaching.  Herein lies my question…

In some of the information I have been reading, I have noted the opinion of some authors that coaching should be by choice only.  It is their observation that mandating coaching will result in lack of buy-in, resentment, etc.  What do you think?  Should it be mandated, or a choice?  The result of mandate at our school has not been especially productive, except with those who truly have a growth mindset.

I look forward to hearing your thoughts on this.  Thank you so much for your consideration!”

My response:  Thanks for your thoughtful email!  Have you read my book, “Get Some Guts, Coach!”?  It provides a super in-depth look on what I see as the most efficient and effective way to coach…and also how to do it.  I state directly in the book that I don’t ascribe to  a philosophy of coaching, but really focus on the logistics of how to get it done with real teachers in real scenarios.

I sensed the recurring theme in your email that there were people who were hesitant, resistant and possibly just straight up defiant?  (Maybe that last description is a bit harsh, but…)  That really indicates to me that there is a leadership issue…and when you said that you’ve had to do a TON of work to gain the confidence of staff, that tells me that you’ve had to ingratiate yourself to the staff in hopes that they’d accept coaching in lieu of a leader saying, “Folks – you’re all getting coaching from Lisa and the professional expectation is that you both will work together…”  If that hasn’t happened and you have had to basically try to convince people to work with you in spite of bad attitudes or resistance or whatever, NO WONDER you’re exhausted!

Coaching can be challenging, but it is not your responsibility to make people like coaching or like you as the coach.  That comes as you do the coaching work.  In fact, I find that teachers who want to avoid coaching (because they probably need it the most!, often act like jerks to avoid it.  I bet some of your most resistant people cause a fuss to avoid you seeing what their teaching really looks like?  My typical advice to coaches is to go back 3-5 times to resistant people and then get the principal involved if the coaching isn’t going to happen with those teachers.  (There are typically 1-2 teachers like this on an average sized campus).

I think that there is a common thought that if we make coaching pretty enough on the outside by trying a slew of different coaching techniques, that it would spur the resistant-to-coaching people on to be excited about coaching.  I just haven’t seen that happen!

What I have seen work well is a principal requiring coaching for all teachers and then the principal and coach sitting down and prioritizing which teachers need to be seen weekly, bi-weekly, monthly and prioritizing the skills that need to be worked on with each teacher – skills that would make a difference.  Without a principal expectation, the coach is left to “sell” coaching to the teachers.  That spells exhaustion in my book!